Tuesday, 17 December 2013
The American newspaper, The Washington Post has classed the selfie taken by Danish premier, Halle Thorning-Schmidt with USA president Barack Obama and British Premier David Cameron at the memorial service for Nelson Mandela as the sixth best political picture of the year 2013. 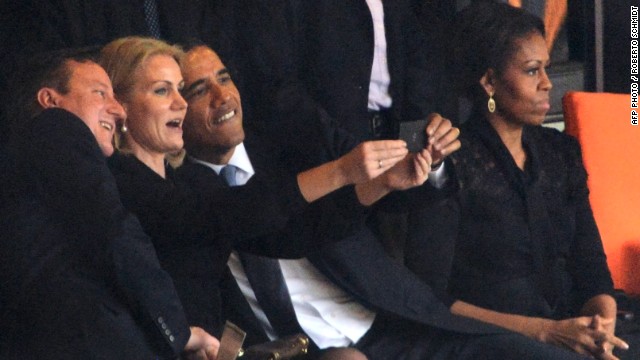 Image from CNN
It caused quite a stir when Danish Prime Minister, Helle Thorning -Schmidt made a so – called selfie at the memorial service for Nelson Mandela, where she took a picture of herself with Barack Obama and David Cameron. The British press went bunkoes and described the scene in different ways including disrespectful to Mandela and unstatesmanlike. For example the Sun newspaper wrote in large print on its FrontPage Disrespectfull.

But not all saw it that way not least the Americans who somehow have a different sense to humour and look at events. For on Tuesday, the American newspaper Washington Post put the selfie of Helle Thorning-Schmidt, Obama and Cameron on the list of the year's 18 best political pictures  and it came sixth place.
See the list here from Washington post

According to the Danish media, it is unclear why Helle Thorning-Schmidt was placed next to the world's most powerful man, Barack Obama.
By Scancomark.com Team