Wednesday, 13 November 2013
Swedish far right party, Sweden Democrats is in another very choppy water after a deputy party leader, had threatened to deport 500,000 "parasites" immigrants from Sweden. He had made his intensions clear on a community radio program.

Sweden Democrats' deputy leader, Jonas Akerlund, 64, today has retracted from his past extreme views and is leading a purge in the party going after racist. He advocates zero tolerance on racism and has checked and dismissed several party members who show heavy hand on racist tendencies. 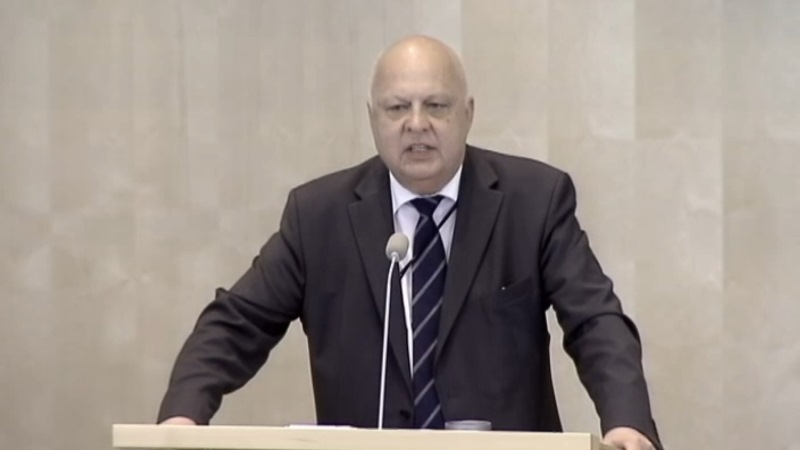 Sweden Democrats' deputy leader, Jonas Akerlund wanted to deport some 500000 “paraciste” immigrants from Sweden / SVT
But the Swedish tabloid paper, Aftonbladet had revealed a before known band gigs where Jonas Akerlund made a grossly “unacceptable” racist utterances.
One of them was the party's community radio program were he called immigrants parasites and wanted to repatriate some half a million of them back home. Sweden Democrats second highest man also wanted to buy  prison places for third generation immigrants in their "homeland" and expel whole families back home.

He had said then that he wanted to repatriate 500 000 of the most obvious and worst “parasites,” i.e. those who do not have any protection in Sweden. Those who are in Sweden for no clear reason other than to “exploit us financially.” “ We would simply send them back home again, half a million people, then Sweden's economy would look radically different within a year, "says Åkerlund in the radio program.

He also said that not residency is given on deceptive ground for they want to stay in Sweden. "Everyone is lying after all."

Jonas Åkerlund also peddled the notion that all children who bullied at school were immigrants and to remedy this, he wanted to drive them and their families out of the country back to where they came from. Bullying would not cease in schools because no one wants to take the tough decision, he had said then.

Confronted with the past utterances, the assistant party boss said: “I was immature then."
"It is of course totally unacceptable language. Jonas has clearly stated to me that this is not something he stands for today and it was a reprehensible choice of words. This was said some almost twelve years ago, "said party leader Jimmie Åkesson to Swedish tabloid Aftonbladet.

According to the press spokesman, Linus Bylund, Åkerlund has clearly dissociated from the choice of words and it is considered as unaccepted within the party. Åkerlund entered parliament in 2010 and is a member of the Constitutional Committee.
By Scancomark.com Team