Friday, 08 November 2013
The leader of the Swedish opposition, Stefan Löfven seem to be getting too clever for the Swedish prime minister’s liking -  when he said that he wants to form a government if his party is to form a majority government, - to be open to all but for the far rights Sweden Democrats.

Prime Minister Fredrik Reinfeldt who is also the leader of the Swedish Conservative party, the Moderate has thus on Friday harshly criticised the leader of the Social Democrats  Stefan Löfven who he feels is looking for means to boost his stance in the opinion polls and glancing hopefully at the example of Norway.

"Their statements are not true-in the conditions that apply to Swedish politics, "said Fredrik Reinfeldt, to the assembled press corps in parliament on Friday. 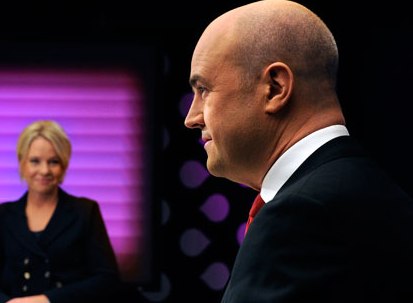 In the morning information came out that the Social Democrats could forms a majority government with both the Centre Party and the Liberal Party while leaving out the Left Part that has a firm place in the bloc policy of the Red Green Alliance has created tension on both side of the Swedish political divide. The social democrats argue that the reason for that is the social democrats have worked with them in the past and that Sweden needs broader political embrace if it is to solve the problems the country faces today.

Stefan Löfven “gambit” was met with a cold shoulder by Annie Loof of the Centre party and Jan Björklund of the People’s Party or the Liberal party. Then Prime Minister Fredrik Reinfeldt is also commenting on the issue as well as the leader of the Left Party, Jonas Sjöstedt which is really furious for being side lines by the Social Democrats despite being a fully integrated member of the Red-Green bloc.

According to Fredrik Reinfeldt, such moves have consequences. The hope to operate a minority government that includes the Green Party, as expressed in the morning is not realistic.

"A minority government will have great difficulties anchoring reforms in a climate where political parties are saying that either, we are part of the government or the opposition. The only thing we will know in the 2014 election campaign is whether the election manifesto that the Social Democrats have tabled will become government policy, "he adds.

But Jonas Sjöstedt and the Left party still wants to be part of a Red-Green government after the election, despite the Social Democrats merely pointing out the Green Party as a "natural partner".

“We are the prerequisite to get through it the way the Social Democrats and the Green Party want. If it is to wants to close the nuclear plants you do not want to do it with Jan Björklund. If you want a stronger labour laws, you do not get it with Annie Loof, and how do we let get away from privatisation, with the parties that created them,” says Jonas Sjöstedt to Swedish television.
By Scancomark.com Team