Tuesday, 17 December 2013
The percentage of managers of Swedish companies who believe that Stefan Löfven, head of the Swedish opposition party, Social Democrats, will head the government after the elections next fall has risen sharply, an new poll show.

According to a survey carried out by polling organisation Skop commissioned by the Swedish business daily, Dagens Industri, writes that a clear majority of companies officials now believe that there will be a power shift after that election though they are not very enthuse about the Socialists and the Greens running the country. 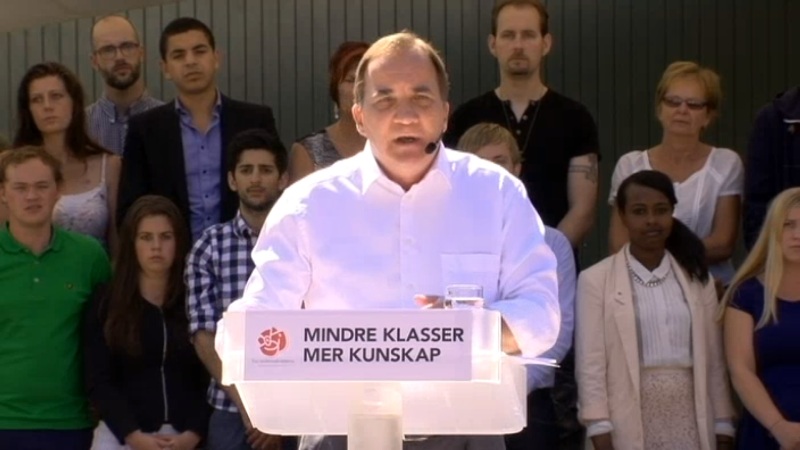 Stefan Löfven, head of the Swedish opposition party, Social Democrats at a party campaign in the summer / Granscole

After two terms in office, Prime Minister Fredrik Reinfeldt seems to be looking focus and his government getting out of ideas, something some people described as “tired”  and the believe now is that he will be forced to pack out of his current  address in Rosenbadsgatan after the election next fall, if the polls are to be believes. It should be noted that many other polls all year round have shown that the current governing Alliance coalition is losing ground.

Back to the polling, some 600 managers responded to the question asked about what their believed is about who will win the next elections. More than half, 59 percent believe that the social Democrats will come on top. When they were in February / March 2012, 74 percent believed then that Reinfeldt and his government would win and only 22 percent believed in a Red - Green opposition will stand a chance.

The fact that the business community believe that the Social Democrats are coming into government does not mean that they endorse or support it. Although Stefan Löfven has made every effort to charm the business community with promises of establishing an innovation council, export promotion efforts and reduced sick pay for workers, they still have strong distrust of the Social Democratic Party.

Only 5 percent of business leaders believe that a Social Democrat led - government would be good for business than today, while 56 percent believe it would be worse.
The right-wing are said to be better in business due to its relaxed policies on taxes, controls and rules. The Social Democrats would likely follow up on stricter rules on things such as employment, safety issues, taxes and controls in the welfare system.
Scancomark.com Team