Wednesday, 11 September 2013
Former Swedish Minister, Nyamko Sabuni of the People's Party, is taking a new position in company ÅFAB.
ÅF AB is the parent company in the ÅF Group with head office based in Stockholm. 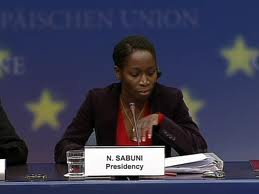 She resigned recently from the Swedish government and was speculated to be getting into lobbying job. But it has now emerged that former minister, Nyamko Sabuni is taking a top job at ÅF AB

Her job is to drive the company's CSR issues as sustainability manager, reports Swedish business daily, Dagens Industri.
Sabuni have both been Equality and Integration Minister, and she succeeds Alice Bah Kuhnke who has been appointed to the Swedish Youth Board.

Company president Jonas Wiström tells told the paper that he hopes the ex-minister would attract more women to the company.
Ms. Nyamko Sabuni resigned from the government recently where she was the first ever-Swedish government minister from the black African race.
by Scancomark.com Team